There is clearly a connection to be made between music and philosophy.

I argue the important role of time in their compositions and the patterns that connect with the culturalphilosophical concepts on time of Gilles Deleuze, Henri Bergson, François Lyotard, Giorgio Agamben and others.

In this paper I want to analyze the becoming-minor of music at the intersection of time and sound, as interface between present and teleology, between conviction and construction, between desire and fulfillment; where an interface is to be seen not as “a thing” ; but as “always an effect” — a process of mediation or interaction. (1) I argue that the structure and philosophical concepts in the analysed compositions relate to our society and that temporality, the dealing with musical time, in a work enables to the becoming-minor of music. That is the beauty of transversality in both Deleuzian concepts and in music.

As musical introduction I suggest to listen to a part of Canto Ostinato first, the most famous work ofnthe late dutch composer Simeon ten Holt, in the interpretation of Ivo Janssen.

This is the beginning up to figure 16. Sit back, it takes 14 minutes: 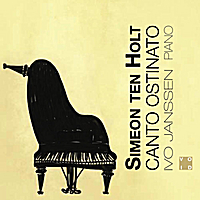 Clearly music is a form of information that is able to not only convey a melody, a rhythm or even a song text, but more interestingly can function as carrier for what is not always so obviously 'in between' the notes: emotion, a sense of time, for some of us colors [synesthesia] religious notion, political, historical or philosophical concepts.

In that way music is able to generate its own simultaneity. That makes music a kind of autopoietic system as described by Francesco Varela and Humberto Maturana (3), as well as a multimedium, what I would like to call a symphonetic system, -a system embedded in a network that resonates with it's environment-, as there is where music gets social,

The music of JS Bach is such an example; everyone will agree that his music is a testimony of his Lutheran believe and his faith in God.

But moreover, for those who know how to look [how to listen], behind this religious front, his music has a mathematical structure, allegedly based on Rosicrucian symbolic esoteric principles and numerology (4) that communicate secretly the Order's strive for spiritual transfiguration and religious dominance. Gottfried Leibniz, a contemporary of Bach, remarked in a letter to Christian Goldbach in 1712:

There is a lot more to be discovered yet after all these years about the Meister's ingenuity.

My point here is not to deploy conspiracy theories, or to talk crop-circles, but to emphasize the variety of information music can communicate.

As other examples I think of composers as Carl Orff in Nazi Germany developing didactical music for Hitler Jugend education, Ottorino Resphigi in Italy nilly willy composing for Mussolini and Dimitri Shostakovich in USSR Russia and his struggle with the communistic authorities, hiding his political critique and frustration in his notes [p.e. in the 7th, 8th and 10th Symphonies].

And just think of it, what could be the program in cache in songs of Pussy Riot or in barbaric Death Metal? What is conveyed by Die Antwoord or Sleaford Mods ? Alle Menschen werden Brüder?

This having said, in this paper I will concentrate on the less obvious connection to be made between the works of philosophers as François Lyotard, Giorgio Agamben, Henri Bergson, Lieven de Cauter, Peter Sloterdijk and the tandem Gilles Deleuze-Félix Guattari on the one hand, and the works of music composers as Pierre Boulez, Johann Sebastian Bach, Simeon ten Holt, John Cage and others on the other hand, pinpointing a composition as Canto Ostinato as case in situ. This paper is not about whether or not me appreciating this composition, to give an artistic and esthetic judgement.

Some may think this composition to be ear-candy; while some low it others get

transcendental. "What is noise to the old order is harmony to the new." (6) That aspect in itself is a great property of music, and will lead to the bifurcation in music later to be explained, but for now I like to focus on the architecture of some works and the connection between the mentioned composers and cultural philosophers.

It appears that on closer investigation the underlying concept that connects their respective works consists of the forming of patterns, -patterns in time that is-,

as time is an intrinsic property of music. In music these patterns form the literal building material with what the composition is construed of, in the case of the philosophers these patterns represent the hyper-structure in what shape our society is shaped. As put to words by Jacques Attali:

"Music runs parallel to human society, is structured like it, and changes when it does. It does not evolve in a linear fashion, but is caught up in the complexity and circularity of the movements of history" (7)

In either situation the handling of musical time has a noticeable influence on the perception of duration. This influence is best described by analyzing the sonic-architecture of Canto Ostinato by Simeon ten Holt.

From there I move to other musical examples and analyse how they connect to some key concepts of the mentioned philosophers.

Via the unique role of time in the composition, I move to Henri Bergson's concept of duration, that on turn connects to Gilles Deleuze and Felix Guattari's concepts on time and their idea's on becoming.

It is precisely the becoming-minor of music that is viewed through the respective works of Simeon ten Holt, John Cage and others, that enables lignes the fuite to escape the social-political ostinato of our lives. We just have to learn to listen.

Page 78: 'An autopoietic machine is a machine organized (defined as a unity) as a network of processes of production

(transformation and destruction) of components which: (i) through their interactions and transformations continuously

regenerate and realize the network of processes (relations) that produced them; and (ii) constitute it (the machine) as a

Page 89: '… the space defined by an autopoietic system is self-contained and cannot be described by using dimensions

that define another space. When we refer to our interactions with a concrete autopoietic system, however, we project this

system on the space of our manipulations and make a description of this projection'.

Bach to have used a code based on the numerical order of the alphabetical letters: A=1, B=2 etc. In the Latin alphabet in

use in 17th century Germany I and J were identical as were u and v, resulting in 24 letters. The name BACH connects in

obtained figures: the Credo in the B-minor mass consists of 784 (7x112) bars, meaning that the name of Christ is been

invoked 7 times. In the same mass the chorus Credo in unum Deum and the subsequent Patrem omnipotentem comprises

of 129 bars, being 3 times 43, [Credo, Credo, Credo] by what Bach supposedly meant that there is no true belief in God

outside the belief in the Holy Trinity.

Since this publication, many articles appeared on Bach's numerology leading to counting of bars, notes, accidentals, theme

deployment, words, letters and submitted the results to mathematical processing and the most phantasmagorical

speculations. The maestro never expressed himself on the subject, nor on his Rosicrucian aspirations, notwithstanding the

fact that Bach's universum is unquestionably mathematical, that musical numerology was in vogue in his time and that in

his heretical possession were found hermetical books by Johann Valentin Andreae, the Lutheran Minister and reviver of

(5) 'Music is an occult arithmetic exercise for the spirit of man/mind who is unconsciously counting'.