My own music relates to Bach's research in as far as how little is necessary to create a musical counterpoint, a layering that recreates a sonic dialogue with the listener. The inspiring combination with the electronic music by Robin Koek gives this counterpoint new possibilities. All our music is live performed an improvised with a free form and is influenced by the acoustics of the location we perform in. Paleis van Mieris is such a location where the spatiality of the architecture and acoustics form an inspiration and layering that we search to include in our electro-acoustic performance.

Almost all sounds are produced on stage by the cello and altered and reused in the electronic composition techniques of Robin. The influence of the building, -the former depot of the Rijksmuseum in Amsterdam- , is also noticeable in the work of the artists in residence. Their work is depicted in the CD booklet. If you want to see their work real size, please contact them.

In the 6 cello Suites, notated so punctually in the autograph by his wife

Anna Magdalena, the music of Johann Sebastian Bach (1685-1750) is characterized by the intention to leave out as much as possible of

a harmonic bass line. The art of the omission so to say, hence the "Senso Basso' from the original title. In the counterpoint process, the bass notes are indicated sparsely, leaving the auditor an active role to create for himself,

-in his inner ear- the necessary bass notes to complete the harmonic structure. This process makes the oftentimes monophonic music polyphonic.

The acoustics of a good space help to carry the sound and facilitate the imaginary polyphony. In these Suites Bach is researching the soloist possibilities of the relatively new cello; in how far it is possible to create melody and accompaniment simultaneously on a single continuo instrument.

The VIth Suite (BWV 1012), composed for a 5-stringed cello, has much freer forms than the other 5 Suites and exhibits the most demanding virtuoso treats and passages.

I play on a cello made in 1698 by Pieter Rombouts in Amsterdam.

All other tracks performed by Robin Koek Electronics and Derck Littel Cello.

Allemande from the facsimile of the VIth Suite (track 4) 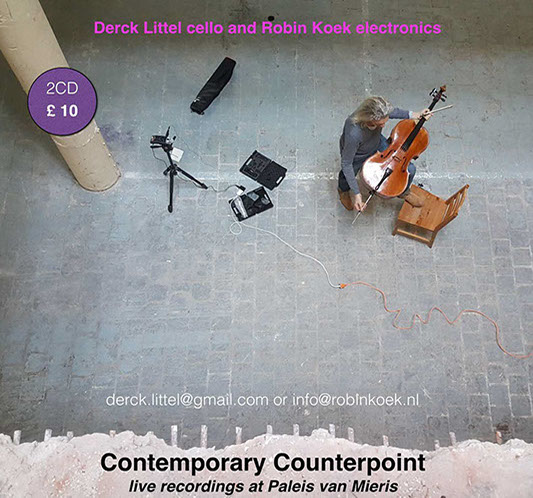