Doing the dishes (After Rirkrit Tiravanija)

With this article I will try to come to terms with the actuality of the relatively new Relational Aesthetics. which is now widely accepted as a discrete genre of art, if not a movement. The notion Relational Aesthetics finds its origin in Nicolas Bourriaud's eponymous work Relational Aesthetics from 1998. An art form that takes place in 'the realm of relations between people and highlight social methods of exchange, interactivity with the onlooker and communication processes as tools for linking human beings and groups to one another'.  Bourriaud defines RA as

'A set of artistic practices which take as their theoretical and practical point of departure the whole of human relations and their social context, rather than an independent and private space'. (Nicolas Bourriaud's Relational Esthetics (Dijon: les Presses du réel, 2002) p. 113

Bourriaud cited the art of Gillian Wearing, Philippe Parreno, Douglas Gordon and Liam Gillick as artists who work to this agenda.

He saw artists as facilitators rather than makers and regarded art as information exchanged between the artist and the viewers. The artist, in this sense, gives audiences access to power and the means to change the world.

As I will explain later, this is quite a claim and unlikely to be achieved at Tiravanija's Thai dinner, or at a social form called a party like Philippe Parreno’s 'Snow Dancing' where he asked the visitors for two hours in which to produce the actual exhibition.Visitors to it were offered all sorts of “things to do.” The day after the party, it was possible to see what had really been produced.

As such the term is interchangeable with the predicate Relational Art Bourriaud suggests.

Since Dewey's 'Art as Experience' we know that aesthetics are primarily applicable to paintings up to Impressionism. The term is not appropriate for installations, events, experimental music. Is the genre looking for aesthetics in art?

So what defines Relational Aesthetics?

Is this a new evolving genre or even a movement?

From the available texts [p.e. the book and an article in Traffic Space-times of the Exchange by Bourriaud] and works [Parreno, Tiravanija, Beecroft, Cattelan, Huyge & others] several qualifications emerge:

-Preference for contact and tactility, and in contrast to previous movements not on visual aspects of communication systems.

-Does not want to be a revival or reinterpretation of any past aesthetic movement.

Relational art can make references to conceptual or Fluxus-inspired methods to convey 'trains of thought that have nothing to do with theirs'.

-Produce relational space-times, freed from the restrictions of the ideology of mass communication.

-Create a social circumstance; the viewer experience of the constructed social environment becomes the art.

-Represents 'an alternative to the depressing, authoritarian and reactionary thinking..' 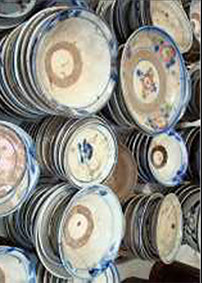 'The task of the artist is to become a conduit for this social experience.' where 'it is not what you see that is important but what takes place between people.' [Hyperallergic]

This intention gives RA an 'open ended design, a kind of public installation'

In the artist-constructed social experiences the star artist becomes an

experience 'curator', or maybe 'ringmaster' to create a social event.

What is this 'social event', you ask? Well, almost anything could constitute a relational aesthetics event:

a communal meal, a discussion … even sitting around.

This legitimizes the question is everything art?

The 'standard cliché summary of modern (and contemporary) art is that now, anything is art.'

Now is it? Since Tiravanija appears to have triggered the movement, let's focus on his work as case in situ.

If I would do the dishes after Rirkrit's feast would that qualify as an art work in a Relational Aesthetic sense?

Why not? Because I'm not famous! It would be an artwork if curated by Rirkrit himself.

The work of well known artist is always good, like songs from celebreties.

Any scratch from Picasso is after all a Picasso, even if he intended to throw it away.

Imagine Rirkrit making some drawings and Picasso being documented doing dishes. Would that qualify?

[In those definitions above it would, provided that the artist intended and curated the event.]

This is some fucked up shit right here. There has to be more! Someone has to clean up the mess after the supper. 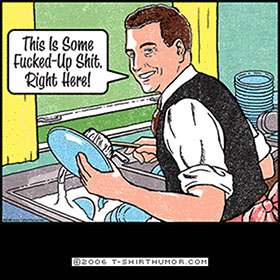 Let's turn the case around and ask ourselves what Tiravanija could have intended when making his first Thai supper pad thai back in 1990, other then the mentioned 'open ended platform of propositions' and 'relational experiences'. What relational experiences? Talking to a stranger when having soup? I can't figure that out. I agree his supper to be an artwork, as it makes me puzzle and wonder and writing this review, but only if this conundrum was intended as such.  [what I doubt] Are there accidental artworks? I doubt that too. I don't puzzle over Picasso's work. But was this Rirkrit's intention? How could we know?

Other things that are problematic in the genre RA:

-This art is made for a certain niche, an incrowd of other artists, an elite of gallery visitors, self acclaimed connoisseurs and/or snobs.

-The works become only art if made by an artist of reputation. Appreciation of a work is not guided. What is the Information Experience Design-factor?

-There is no conflict, the relations have to be aesthetic instead, a kind of artistic mindfulness experience.

These are the five aggregates as described in Mindfulness:

• Material form: includes both the physical body and external matter where material elements are continuously moving to and from the material body.

• Feelings: can be pleasant, unpleasant or neutral.

• Perceptions: represent being aware of attributes of an object (e.g. color, shape, etc.)

• Sensory consciousness: refers to input from the five senses (seeing, hearing, smelling, tasting or touch sensations) or a thought that happen to arise in the mind.

This model describes that sensory consciousness result in the generation of feelings, perception or volition, and that individuals’ previously conditioned attitudes and past associations influence this generation.

-No exchange value of produced objects, because there is

-Nothing tangible. As I read in May Quarterly Journal: 'The wide variety of forms and processes used by most of these artists clearly shows that they do not dictate this object. What is produced, in concrete terms, is a connection with the world that is broadcast by an object, which itself determines the relationship we have with it. In other words, the relationship with a relationship'.

-No complicated demands of the visitor, just 'rendered time and space', reflecting tendencies in society as 'art is made of the very same stuff of which social exchanges are made'

Summarized we are lead to understand that the goal, if that exists, is to experience a possible interaction with other people. That is not enough for me. Think of the other 'Supper' and all the possible views, either artistic, religious, historical, mystical and philosophical the work offers. Compared to this fantastic work the Thai soup is very watery. 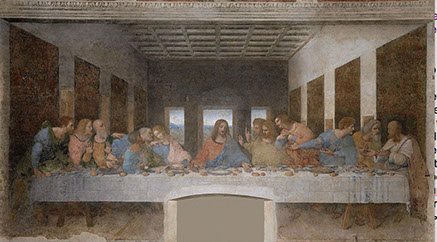 Apparently one doesn't have to study art, everyone is an artist. Everyone can sing. Anything goes. A critique often heard from those outside the white cube.

What seems important is that the producing artist has enough 'likes' and that a visitor becomes 'important' when going to such an exhibition. Take selfies with the artist. 'I know that famous artist'.

Art had to become social, as art represents the tendencies in society. But people are so alienated from each other that the organizing of a dinner functions as artwork in its attempt to connect people.

I agree that society has to become social again, not via social media and fora, but as lived experience. And art can be right in the center of that process. That is where RA  is about. But art needs conflict, discrepancies, at least discussion, and is not intended to give vague and soft experiences.

In Italy, for 30 years under the Borgia's, they had warfare, terror, murder and bloodshed, but they produced Michelangelo, Leonardo da Vinci and the Renaissance. In Switzerland they had brotherly love, they had 500 years of democracy and peace - and what did that produce? The cuckoo clock.

Artists should take responsibility for the work they make. Being from 1960 I may be still a bit of a revolutionary. I'm contrarian. I have difficulty in accepting the status quo without attempt to progression. We can learn! Why otherwise not close the art academies if no skills would be required anymore, if anything goes. But like in music, to play the notes right and convey a feeling, an experience, some meaning, there has to be historical consciousness, training, capabilities, talent and frustration.

Certainly new experiences can be had when talking to strange people, but there needs to be more to give life meaning. It is time this notion returns to art. Someone has to say that, someone has to clean up after the supper.