In his book Making, Anthropology, Archaeology, Art and Architecture Tim Ingold advocates a way of 'thinking through making' in which sentient practitioners and active materials continually answer to, or ‘correspond’, with one another in the generation of form.

In an attempt to resume this text I came to a visualization, a torus actually, by drawing and merging other concepts. The condensation of important concepts, notably Ingold's 4 A's from his title, resulted more or less in a drawing, a visualization of a 5th A: an apple. As Harvey (1972: 101) argues, drawings were as essential for the transmission of ideas .. as is musical notation to the performance of complex polyphonic music'. 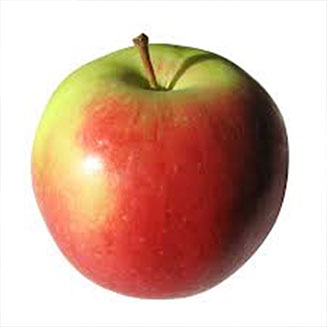 The forces acting upon the process of learning by making needed a kind of circular depiction of a loop, because to come to a work there needs to be constant mouvement. Not a linear movement but circular.

['the process of making is not so much an assembly as a procession, not a building up from discrete parts into a hierarchically organised totality but a carrying on'] The torus expresses this movement. 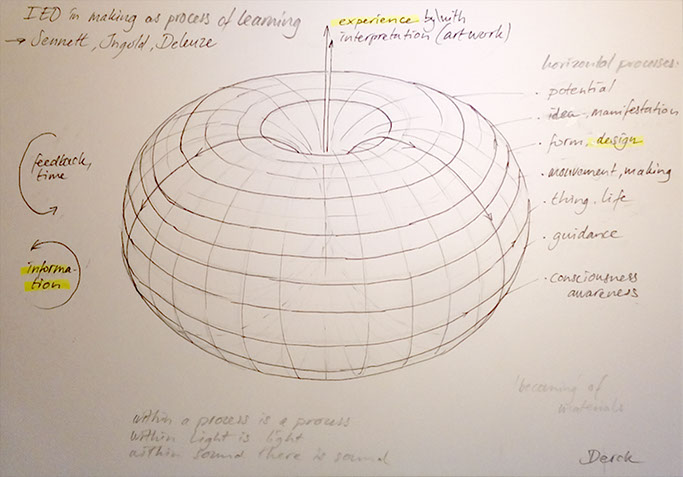 To explain the idea we have to follow the flight lines in the picture. First there is potential, a predisposition.

A materiality. Keeping in mind that ['Materials do not exist, in the manner of objects, rather, as substances-in-becoming'.]

Deleuze writes on materiality: 'whenever we encounter matter ‘it is matter in movement, in flux, in variation’, with the consequence that ‘this matter-flow can only be followed’ (Deleuze and Guattari 2004: 450–451).

You need hands to work with clay, not only clay, and likewise you not only need ears to hear, there has to be sound.

Subsequently, as seen in the next layer, follow an idea [an 'envision' says Ingold], that manifests into a more concrete form. ['Form came to be seen as imposed by an agent with a particular design in mind, answering to his or her purpose, while matter – thus rendered passive and inert – became that which was imposed upon.'] a design, that by actual making gets 'live', becomes a 'thing' in the definition of Ingold.

A 'thing' placed into a 'correspondence' – that is itself defined by a narrative of anticipated use.

With some guidance, critique or review some flaws may become clear, leading to awareness. This involves time. We are in a process of development of new information.

As the process circulates, we start on top again in the apple, but now with new feedback included, new insight. In the meantime we have a [preliminary] result: an interpretation, [an artwork if you wish] and an experience.

When moving through the rotating layers of the torus we encounter other movements: in the design, in the information and in the experience. On design Flusser remarks: ‘A designer’, he writes, ‘is someone who is, artful or wily, a plotter setting traps’ (Flusser 1995: 50). Every object of design sets a trap by presenting a problem in the form of what appears to be its solution. This problem has to be addressed in combining properties and qualities and merging theoretical with practical.

In short: we learn by doing, we develop skills. 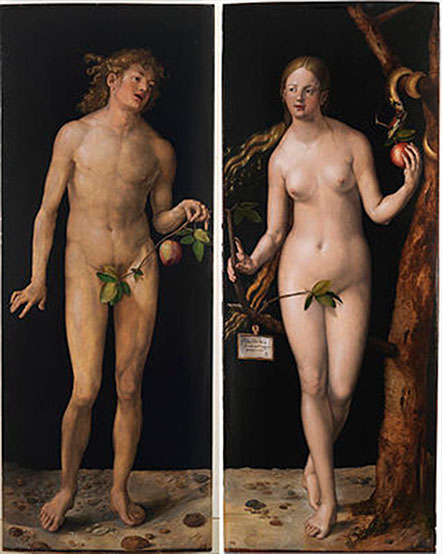 A comparison with the allegorical biblical apple comes to mind. Who doesn't know the story?

By eating the fruit mankind learns to distinguish between good and bad, an insight obtained in new information. He becomes aware of a new experience: his 'nakedness'. He discovers how this knowledge informs his future status of being. The process of development is kickstarted.

An apple is symbolic for this concept, hence the name of the computerbrand.

We can call this learning process evolution, although some design is involved.

‘There cannot be design without a designer’, declared Paley, nor can there be ‘contrivance without a contriver; order without choice; arrangement without any thing capable of arranging. [p64]

Wether or not this Designer is a 'blind watchmaker' I leave for another discussion as I don't intend to get entangled in religious matters; the topic is making, not believing.

What I do underline is what Spuybroek (2011: 243) suggests: Our models for art and design should ideally be drawn not from horology or architecture but from gardening and cooking.

‘A great gardener or chef', he observes, ‘not only sees the state of things but senses where they are going’ (ibid.: 240). Ingold has called this sensing 'anticipatory foresight': a foresight that does not so much connect a preconceived idea to a final object as go between.

It's just great to see how my torus-apple functions not only as vehicle for the concepts described by Ingold on making artefacts [bifaces], architecture [Chartres], archeology [mounts], but now also we can add cooking and gardening [here comes my apple again]. Likewise the concept applies to Deleuzian becoming too. Every time when there is learning involved we can visualize the torus concept.

Indeed it functions for making music as well. Like brick making and basket weaving, making music also 'materializes' idea's, rendering natural substance 'cultural'. It links art and anthropology through the correspondence of their practices.

It summarizes the IED principles.