“Words are symbols for shared memories. If I use a word, then you should have some experience

of what the word stands for. If not, the word means nothing to you.”

The story by Luis Borges, Funes, the Memorious, has a great narrative.  A young man, Funes, remembers everything after a fall from his horse. To make sure nothing gets lost in his memory he invents a new terminology with strange and abstract words as The whale, Olimar etc to replace large digit numbers.

It is actually the narrator that is presenting his memory in narrative form. This unnamed narrator isn't always sure of his memories, as the described story took place half a century ago.

By this setup two kinds of memories are juxtaposed, an objective vs a subjective memory.

In fact his literary gem deals with many of the concepts as pointed out in Gleick's Information [1] and as discussed in IED. In his book James Gleick argues that information is not identical with knowledge, making it unavoidable to reconnect meaning to the discussion on knowledge and information as I will explain.

We could see the storage of information in Funes' head as data, -his head functioning as database-  programmed in a newly invented code of random words. These data have no other function than being stored as there is no meaning to the words. To the narrator and us readers apparently they mean nothing.

By his accident Funes became a humanoid 'machine' performing decodings of the available data.

Here we can connect to Shannon's information theory, as read in Gleick's. In 1948 Shannon published a paper called “A Mathematical Theory of Communication” in a Bell Labs technical journal. [2] What was - and remains - radical about the Mathematical Model of Communication is that it asserts that information is a measure of quantity, not meaning. On one hand, this degree of abstraction allowed engineers to imagine new techniques for manipulating data as systems, which helped to bring about contemporary networked society. On the other hand, the notion that information has nothing to do with meaning is a stark reminder that communication can and does take place all the time without any human input whatsoever, at speeds too fast to comprehend and scales too small to observe. The implication is, that while we remain important components of the circuits of communication, we have long since ceased to be in control of them. Shannon writes, "messages have meaning: that is, they refer to or are correlated according to some system with certain physical or conceptual entities... but irrelevant to the engineering problem. This is not to confuse a signal with what it signifies.

The only difficulty in the Information system is the inevitable occurrence of noise.  [See on this also my review on H. Steyerl, Apophenia]

"Viewed at the most abstract level," the science writer George Johnson remarked in the New York Times, "both brains and computers operate the same way by translating phenomena --sounds, images, and so forth-- into a code that can be stored and manipulated."

Shannon's central dogma, “Meaning is irrelevant,” declared that information could be handled with greater freedom if it was treated as a mathematical abstraction independent of meaning. information is nothing else but an electronic signal that could be send to a receiver. The meaning of that signal was submitted to the technique.

The consequence of this freedom is the flood of information in which we are drowning. In the story Funes literary dies aged only 19.

The immense size of modern databases gives us a feeling of meaninglessness. Information in such quantities reminds us of Borges’s other famous story about the library extending infinitely in all directions.[3]

Norbert Wiener states [in his book 'Cybernetics, or control and communication in the animal and the machine [4] that cybernetics view humans as nodes in networks, as machines; brains, cities and even societies live in networks of feedback loops. 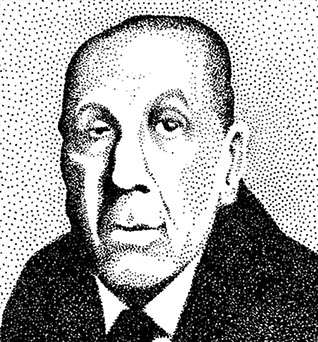 In essence Borges touches on a hot topic in my art practice. In my opinion information in the sense of streaming data is an excellent tool in designing art. For the experience of art, on the contrary, we need meaning. The time that art could be separated from meaning is over in my opinion. Art without meaning is an empty soul without boundaries. Than anything goes. I'm talking all disciplines, from paintings via video's to music.

It is our task as artists to bring meaning back into this void.

As finite creatures who think and feel, we can create islands of meaning in the sea of information.

Art happens, however, to be a matter of self-evidence and feeling, and of the inferences of feeling, rather than of intellection or information, and the reality of art is disclosed only in experience, not in reflection upon experience.
—Clement Greenberg

In general, art does not need to become a semiotic discussion about experienced interpretations whether or not been intended, resulting in a dispute who has best arguments wins; rather it deals with the esthetic choices that define the autograph of the artist. Likewise the short story by Borges wants to synthesize between the 'meaningless' [but known] virtual information and the meaningful [but often uncertain] memories, thus trying to find an equilibrium between asserted control of the machine and the creative freedom of the human. This was written in 1944, long before common knowledge on information and data. Before Shannon's Communication Theory [1948]

With Deleuze and Guattari in mind we can formulate that somewhat different.

Where bodies and machines enter into machinic relationships, that is, become parts of an assemblage, D&G distinguish two opposed processes: at points of instability, -where a functional equilibrium gives way to movements of change and becoming-, there is what they call a decoding or deterritorialization; but on the opposed face of the assemblage, in contrast to these "lines of flight," there are processes of stratification, involving redundancy and recoding, or reterritorialization.

Can this conceptual scheme be applied to art and sound and the complex processes between the tandem audition and vision? Obviously, art presupposes a deterritorializing of perception, a freeing not only of the thing seen or heard, but the act of seeing itself from any specific context or purpose; whatever use to which we then put art would be a recoding or reterritorialization. Deleuze and Guattari refer to deterritorialized perceptions, which they call percepts, in What Is Philosophy? ([5]

These technological percepts are in need of remediation.

For example when talking about entropy, wouldn't it have been great if Gleick extended the idea of the Maxwell demon to real life, to state that life is a conquest of entropy as Vilém Flusser suggests. [in Towards a Philosophy of Photography [6].

The term machinic is Deleuzian of course. In A Thousand Plateaus it denotes the type of working relationship among the heterogeneous elements and relations defined by an assemblage or agencement. [10]

'in the current climate of accelerated technological innovation, "a new consciousness of the sense of technical objects" may be necessary if we are to be fully receptive to and engage critically with the new forms and singularities of contemporary visual experience'.

Johnston's concept of machinic vision is Deleuze-Guattaritarian, although they never employed the term machinic vision. Nevertheless, at various points in their writing, particularly in the monograph on the painter Francis Bacon and in the two-volume study of the cinema, something like machinic vision seems very much at issue.

A machinic vision [listening] in my work could serve as a de- and reterritorializing interface between listener and performer, and machine and human. I see the computer as mode of mediation, as Informatic machines do not participate in the worldly logic of essences and instances but simulate it. Therefor I tend to approach Information not as goal, but as means, as [in my case a] musical interface, where an interface is to be seen not as “a thing” , but as “always an effect” , a technique of mediation or interaction. (quotes from A.Galloway) [12]

With all his memory flaws the narrator in Borges' story is the better interface.

'I suspect, nevertheless, that he [Funes] was not very capable of thought. To think is to forget a difference, to generalize, to abstract. In the overly replete world of Funes there were nothing but details, almost contiguous details'.

Obliviousness and aptness to forget is what will safe us in the era of absolute, totalitarian, digital remembrance, an era that started, ironically, when Borges died in 1986. It will bring back meaning to the things that are remembered.

Or did I mention that already?

[4] Norbert WienerCybernetics: Or Control and Communication in the Animal and the Machine. Paris, (Hermann & Cie) & Camb. Mass. MIT Press, 1948

[5] Gilles Deleuze and Félix Guattari, What Is Philosophy?  Verso, 1994

McLuhan’s thesis is that people adapt to their environment through a certain balance or ratio of the senses, and the primary medium of the age brings out a particular sense ratio, thereby affecting perception.