In this booklet I will be addressing the several layers designed in the work ‘the Sonic Kitchen’ for the 2018 RCA Show. Design here, in the words of Ben Highmore, ‘as a series of relays, where the ‘object’ of study isn’t the thing, but the relations between a network of things and subjects’. [ in: ‘A Sideboard Manifesto: Design Culture in an Artificial World’, 2014]

The use of technology, in this context specifically the production of sound, is to be seen not only as an extension of the body and its

functions, but as a way of establishing new relationships between human and machine, as sound cannot be regarded simply in isolation. It is only meaningful in a human environment.

The work is a sound performance that takes place in a private environment, a kitchen that functions as stage and as source of information, where the participant engages in a musical interaction and experiences the location in a new way. Here we can hear all sorts of known sounds from kitchen tools and so on. But there is another potential sound-source, unnoticed and unheard, in the form of electro-magnetic fields, EMF.

The object I made, the Sound Sniffer, based on the Elektrosluch by Jonas Gruska, is an electronic device that enables listening and interaction with the EMF. All electronic objects emit EMF’s, a kind of radiation. These can be in different densities, pitches and ranges. By just pointing the Sniffer at an electronic object, such as a switch, one can listen to the divers spectrum of the different EMF’s surrounding us, what I call the Sonic-topoi.

The Sniffer is not only an amplifier for such radiations, but is also a modular synthesizer that enables control and production of new sounds and counterpoint. Together with the sounds from the kitchen and the amplified sounds of the EMF we are able to experiment and compose on location, interacting musically with this environment, thus creating an awareness of the electronic aural architecture.

Situated in a kitchen, I organize 10-15 minute walk-in performances, where about 4 people at a time can musically interact with EMF simultaneously. A kitchen is a rich source of radiation to be found in all sorts of devices, tools and machines [fridge, microwave, cooker, stove etc, but also light sockets etc] and functions as stage for exchange and a source of information. The participant is invited to explore the available invisible aural architecture and engage in a new social-sonic experience.

At the same time I will use the kitchen equipment to make coffee and tea for the participants, not only to generate new frequencies of radiation to listen to, but also to create a suitable atmosphere for social interaction and discussions. I aim at an audience that does not usually attend events. A kitchen is an everyday ‘system’ known to everybody.

The work aims at a reconfiguring of everyday actions as performance, that intends to strike a careful balance between an open-ended score and the performer’s interpretation of the simple instructions.

With this setting also we come in the realms of theatre, playing out a technocentric narrative, a mix between invisible theatre [1] [Augusto Boal], or Brechtian Epic theater [2] and Delegated Performance as named by Claire Bishop. [3]

[1] Invisible theatre is a form of theatrical performance that is enacted in a place where people would not normally expect to see one, for example in the street or in a shopping centre. Performers disguise the fact that it is a performance from those who observe and who may choose to participate in it, thus leading spectators to view it as a real, un-staged event.

[2] This is a form of Dialectic Theatre with no elements from outside reality that creates a Verfremdungs Effekt.

[3] Delegated performance produces disruptive events that testify to a shared reality between viewers and performers, and which defies not only agreed ways of thinking about pleasure, labor, and ethics, but also the intellectual frameworks we have inherited to understand these ideas today. The set up intends to add a new sonic layer to Relational art/aesthetics as described by Nicolas Bourriaud and experienced for example in Rirkrit Tiravanija’s Thai Supper. I function as facilitator/mediator and design the sonic environment and experience. Tiravanija says: ‘The task of the artist is to become a conduit for this social experience..where ‘it is not what you see’ that is important but what takes place between people.’ [quoted in Hyperallergic.com 2012]

All radiation on the electromagnetic spectrum is produced by the interactions of two forces, referred to as fields. Radiation has both an electric field and a magnetic field. Electric fields are the forces acting on charged particles (parts of atoms), like electrons or protons, which cause them to move. Electric current is simply the flow of electrons produced by an electric field. A magnetic field is created when charged particles are in motion. Both types of fields are strongest close to the source and diminish with distance.

infrared radiation, and visible light. These EMFs are in the non-ionizing radiation part of the electromagnetic spectrum and are under scrutiny for possible damage to DNA or cells. 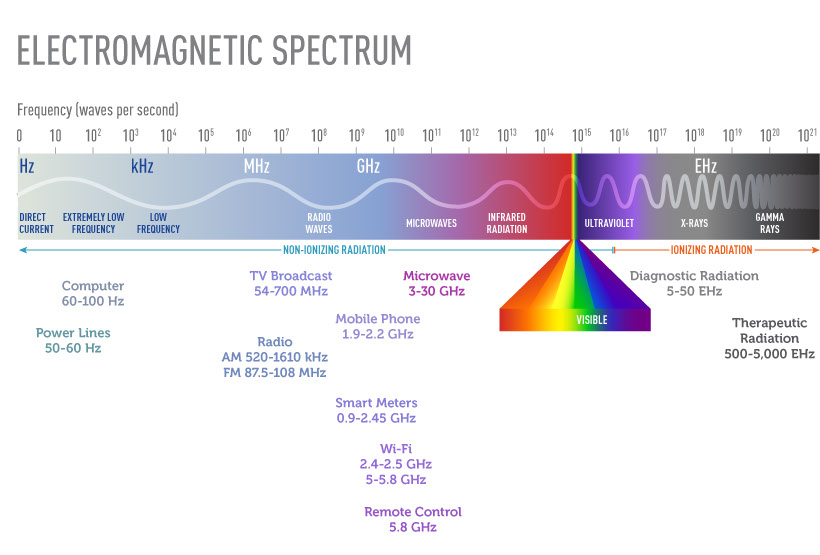 In the ability of radiation to move atoms, -to ionize-, lies the reason for health concerns. Obviously nobody would put his head in a microwave, but on a different scale your phone has the same effect. Depending on intensity, duration and distance to the object we could fry our brain. In fact, our body is electric. Every cell in our nervous system communicates with electric signals. An exponential growth in use of electronic objects does effect this system, as our body absorbs EMF, causing headaches, insomnia, infertility, DNA damage and eventually cancer. [see further reading below]

A study of real-world exposure to non-ionizing radiation from magnetic fields in pregnant women found a significantly higher rate of miscarriage, between 10 and 15 percent, providing new evidence regarding the potential health risks. There is also a twofold increase in risk of childhood leukemia with exposures 0.4 μT or higher. 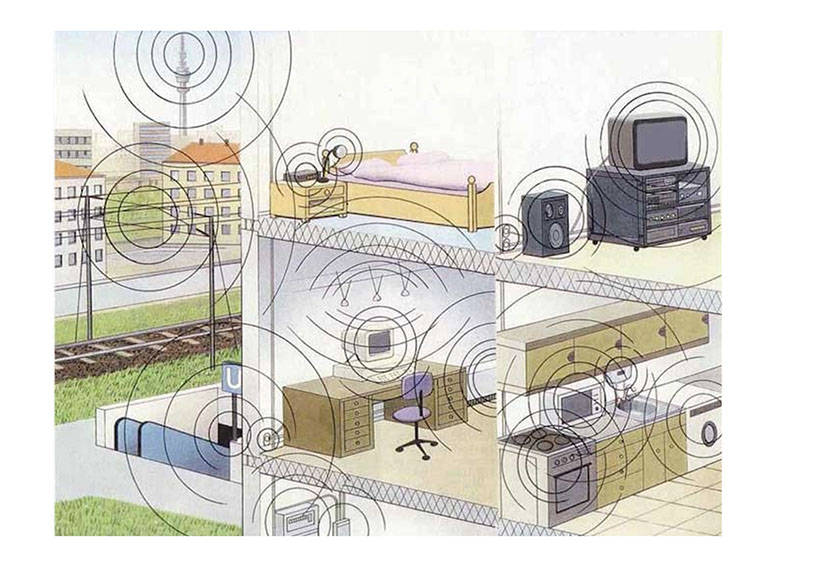 Radiation not only effects our body, but also has an influence on behavior of migrating birds, insects and trees. Researchers show that migratory birds, insects and other animals are unable to use their magnetic compass in the presence of urban electromagnetic noise.

growth of tumors in mice. The research used radiation levels that do not cause heating and are well below current safety standards. Ash trees very close to Wi-Fi access points showed an increase in cracks, bumps, discoloration and other forms of tissue-death, pine needles age prematurely in EMF.

The number of white storks within 200 meters of a cell base station had decreased from unsuccessful nesting and deformed or dead embryos. Cell & cordless phones have negative impacts on bees ability to stay in their hive and also promote aggressive behavior. The EMF causes changes in bees  orientation ability as well as a decline in bee colony strength, reduced egg laying ability of the queen and loss of ability to store honey.

The telecommunication and electronics industry have a major conflict of

interest against consumers becoming aware of health effects from EMF

exposure. In fact, they might even be in denial. Their safety claims are

them to make things safer. Another critical point to keep in mind is that the current industrial limits were set in 1996 and have not changed since, even

as the technology powering phones has progressed rapidly. Yet, in 2011, the World Heath Organization listed cell phone radiation as a ‘possible carcinogenic hazard’ in the same category as lead, gasoline engine exhaust, and chloroform.

As of 2017 this carcinogenic possibility has changed now to ‘highly likely’ carcinogenic, but no representational political action has been emerged in Europe so far. On the contrary, a new 5G wifi network is to be operational in 2020 in Amsterdam, with the intention to connect over 50 billion devices together. 5G uses 100 Ghz frequencies, meaning that every body gets to absorb the radiation 100 billion times a second. Since the frequency works over short distances, the network will need an antenna on every 10-12th house. According to Dr. Devra Davis, president of the American Environmental Health Trust, this means a enormous uncontrolled experiment with humanity. Dr. Yael Stein concludes that many people will experience pains via their nociceptors and sweat glands, the same effect as caused by electromagnetic weapons used in crowd-control.

by Ved Parkash Sharma, Department of Environment and Vocational Studies,

-Magnetoreception in Birds and Its Use for Long-Distance Migration, Henrik Mouritsen